Recently the 4000th cave report was submitted to the VSS, a major milestone, and a nice round number.  Jim West of Barboursville, Kentucky submitted the report on Virginia’s 4000th cave, Rams Head Cave in Lee County.  Thanks Old Yellow Hat, you’ve made a difference.  Here’s a little background on how we reached that 4000 mark.

We got started pretty early, in 1769 to be exact, when Daniel Boone described Batie Creek Natural Bridge Cave in Lee County.  Not long after, Thomas Jefferson, being an inquisitive fellow who liked to write things down, described 5 caves and drew a map of Madison Saltpeter Cave (Augusta County). The Madison map, drawn in 1787, was the first cave map produced by our young nation.  In fact Jefferson, with his 5 described caves, held onto the record for having written the most Virginia cave descriptions for the next 144 years (the five caves Jefferson described were Cudjos, Lee Co., Natural Bridge, Rockbridge Co., Madison Saltpeter Cave, Augusta Co., Blowing Cave, Bath Co., and Bean Cave, Frederick Co.). In 1933 William M. McGill surpassed Jefferson when he described 9 caves in his book, Caverns of Virginia.

By 1941 there were 31 caves described in various documents, books and references.  In 1941, during the war years, Bill Stevenson organized the National Speleological Society (NSS).  Many of the caves visited in the early years of the NSS were Virginia caves.  Interestingly, with no standard operating procedures and no prior examples to refer to, these early reports were often more complete and enlightening than today’s reports simply because the participants recorded everything.

As reports began to accumulate it became apparent to Henry H. Douglas that there needed to be some organization to all this data.  In 1954, as a project of the NSS, he officially kicked off the Virginia Cave Survey, beginning with a total of 492 cave descriptions.  At that time, as you might guess, there were lots of caves known to local residents that organized cavers knew nothing of.  These early cavers just had to find the transportation to get there.  The enthusiasm and excitement created by this vast, untapped cave frontier spurred rapid exploration.  All area grottos participated and it was a major focus of the Virginia Region.   Henry Douglas completed his survey with the publication of Caves of Virginia in 1964. In later years, as we became more aware of the potential impact of over-visitation, this book proved to be all too successful.

Prior to the publication of Caves of Virginia, Dr. John R. Holsinger had already taken the reins as director of the Virginia Cave Survey.  Holsinger considered 1627 caves to be “of record” at that point. Douglas had included many vague references and “FRO’s” with no specific locations in his book. Holsinger, in an attempt to include only proven caves in the survey, deleted most of these unsubstantiated leads (subsequently many of these deleted references and leads have been confirmed to exist and have been re-added to the database).

Holsinger knew that many caves were still to be found and described in Virginia. With a contagious energy and enthusiasm he continued the survey with much support from the region. A ten year effort culminated when he produced  Descriptions of Virginia Caves in 1975. This work listed 2319 caves, although with reports received after the publishing deadline and with deleted caves that would later be added back into the database, the total at the end of Holsinger’s directorship would total 2422. 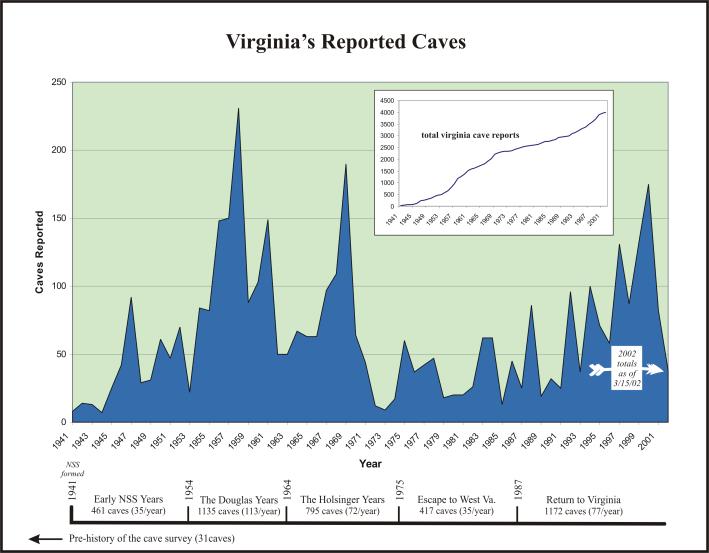 Many changes occurred after John Holsinger stepped down as Director and Phil Lucas took over leadership of the survey.  The name of the organization itself was changed from the Virginia Cave Survey to the Virginia Speleological Survey, eventually receiving survey status with the NSS. The VSS also became a Virginia corporation as a non-profit,  tax-exempt science organization.  Most importantly, in terms of caver involvement, instead of consisting only of the director, the Survey was now governed by a board of directors comprised of cavers active in Virginia.  Initially the members of this board were themselves elected by the Virginia Region.

However several other factors had a profound adverse effect on the number of cave descriptions submitted during this period.   First, with the publication of Description of Virginia Caves complete, the driving and unifying force that accompanies the goal of compiling such a book was absent. This dropoff is actually best seen in the final years of Holsinger’s reign itself.  The chart shows the dramatic downturn in cave reports that occurred from 1972 through 1974 as the focus of the survey went from data collection to the publication of the manuscript.

Second it became apparent that the world had changed.  Conservation began to play a very important role in the minds of most area cavers.  It became obvious that publishing a state cave survey with locations could have an undesired impact.  We will not do this again.  The Virginia Region itself began to change to a caving organization that focused more and more on conservation and recreation.

Third, big new discoveries and project surveys in West Virginia soaked up the time and energy of a lot of cavers who might otherwise be caving in Virginia.  This really started in 1973 or so, near the end of Holsinger’s publishing deadline. It still continues today, although perhaps the tide started to swing back toward Virginia in the late eighties.  During this 14-year period, some assumed that there wasn’t that much left to find in Virginia. New cave reports slowed to a rate of 35 per year.  The phrase “Virginia is caved out” was heard.  But it turns out that we just weren’t looking

The late eighties and nineties brought Virginia out of the new cave doldrums.  Many county surveys were formed around this time.  These surveys were responsible for reports on many new caves.  But new discoveries were being made by cavers all over the state.  Many were exciting discoveries.  Old caves were pushed hard and when fully surveyed turned out to be much longer than previously thought.  Careful fieldwork showed entrances overlooked in the past.  Amazingly, many areas simply had never been looked at before.  Perhaps most importantly though, digging showed that many more caves were there waiting to be found for those willing to put in the time, effort and determination to get into them.  Lots of caves.  Big caves.  Deep caves.  Pristine caves.

From 1987 to present 1162 caves have been reported. And we seem to be picking up steam. It’s encouraging that this amount of data has been generated without a looming statewide publication to act as a catalyst.  We seem to be finding, studying, mapping and reporting our caves because we’re devoted to them.  And because we like to.  The next decade may very well prove to be the most rewarding yet.