What is the VSS? 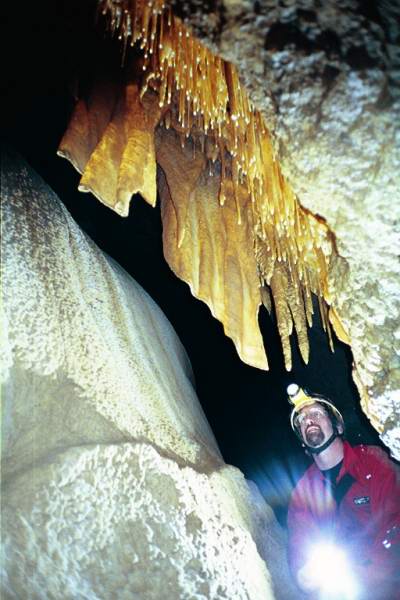 The VSS, a small, nonprofit group run by cavers active in Virginia, is an official survey of the NSS. Phil Lucas formed the survey in 1974, and directed it as the President until 2006. The primary mission is to gather and maintain an informational and survey database on caves in the state of Virginia.

This "database" is composed of three main parts. A map file contains maps of well over 700 caves. As survey and map drafting standards have changed over the years, many of these caves have been resurveyed (some 2, 3, 4, or more times). The "map file" contains close to 1,000 maps.

The second part of the database consists of a hard copy paper file (archives). Stored in large filing cabinets, these files contain all the cave reports, descriptive articles, leads, ramblings, inventories, and other informational material that the VSS has accumulated. Inside one can find records on much of the history of Virginia cave exploration and survey.

The third part of the database is the computer database. In the mid-1980's, the hard copy files were transferred into a computer database program, allowing for enhanced tracking, upkeep, and utilization. Appropriate requests from scientists, agencies (such as the highway department), and the caving community can be answered more accurately and more quickly. The computer database is not a static tool. Not only is actual cave information continually entered, but the database itself is often modified and tweaked to make it more efficient or to do more and better things.

Historically, the VSS has been "exploration/survey heavy." In other words, most of the information that reached us concerned new caves, new maps, survey data, etc. The VSS always welcomed and encouraged information from other sciences (biology, paleontology, archeology, geology, etc.), but this type of data was harder to come by. However, the last few years have found more diverse information being produced. For example, due in large part to the efforts of Dave Hubbard over the course of just a few years, 22 species either completely unknown or previously unknown in Virginia have been located. The potential for more discoveries is virtually unlimited.

As new caves have turned up, and as known caves have been more closely examined, the number of confirmed saltpetre caves in Virginia has greatly increased (again, thanks in large part to Hubbard). A number of caves are presently under study for paleontological remains.

Southwest Virginia has been found to have a myriad of archeologically significant caves that have been documented and are currently under study. In one case, a particularly significant site has forced the modification of a highway under construction.

Since the late 1980's, in an effort to communicate the type and amount of information that the VSS receives and maintains, the survey has published a newsletter (the Virginia Cellars).

The VSS is also interested in assisting county surveys and other survey projects by providing appropriate information from the data file, offering manpower, or in any other way that we can help. It is hoped that as cavers locate caves, map and study them, the resulting information will be shared with the VSS. As with any state cave survey, the accuracy and completeness of the information in the VSS data bank is directly dependent upon the cavers out there who are finding the caves and mapping the passages.